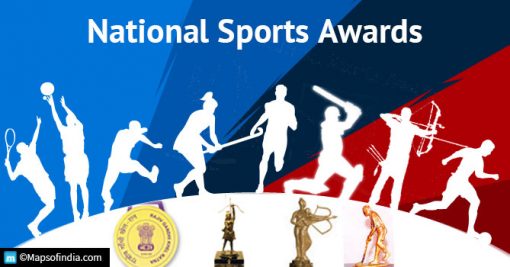 We have grown up listening to this quote “All work and no play makes Jack a dull boy”. It beautifully illustrates the importance of sports in our life. Sports are extremely essential for the active development of an individual’s brain as well as body i.e. physically & mentally. For long playing sports have been viewed as a way to stay healthy and keep fit. It has got both physical and psychological benefits. Sports impact on education is limitless. Students are encouraged to participate in sports while in school. There are several other benefits of sports like- Health, self confidence and self esteem, teamwork, leadership, social skills, discipline and many more.

We all love to see our favorite sports stars in action, whether it is cricket, football or hockey. But, how often do they get honored for their capabilities and talent. Well, there are quite a few awards conferred to sportsmen who have made a mark in a certain sport. There are a total of 4 National Sports awards given every year. Besides these National level Sports awards, there are many sports awards given by private organizations and are also considered as reputed.

The annual Sports Awards ceremony, which takes place on 29 August every year, is an occasion to celebrate and reward the best athletes and coaches of the nation every year. 29th August has been picked as the date for giving away the rewards as it’s the birth anniversary of hockey legend Dhyan Chand and is also celebrated as the National Sports Day. The event takes place at Rashtrapati Bhawan with the president honouring the recipients.

The Rajiv Gandhi Khel Ratna Award is conferred in the memory of Late Prime Minister Rajiv Gandhi. It was started in the year 1991 and is the highest rank National Sports Award in India. This award is given to boost the morale and confidence of the players. Rajiv Gandhi Khel Ratna Award is presented by the Ministry of Youth Affairs and Sports to the players for their exceptional performance in sports in India. Up to the year 2004, the recipients of the award were given a cash prize of Rs. 5 lakhs, which was later increased to Rs. 7.5 lakhs in the year 2005. A medal and citation are given along with the cash prize to the player. The first recipient of the award was Vishwanathan Anand in 1991-1992. Karnam Malleswari was the first woman who was conferred Rajiv Gandhi Khel Ratna for weightlifting in the year 1994-1995. Pankaj Advani is the only player to receive this award for two different games- Snookers and Billiards.

Arjuna Award is the oldest National Sports award in India which was instituted in the year 1961. It is conferred by the Ministry of Youth Affairs and Sports. This award is given to a person who has been consistent and has exhibited outstanding performance for four years in national and international games (including Olympics, Asian Games, and Commonwealth Games). The award is named after “Arjuna”, a famous archer dating back to the times of the Mahabharata. All the recipients of the Arjuna award are given a bronze statue of Arjuna and a scroll along with five lakh rupees cash prize. Arjuna Award was first presented to six people in 1961 namely Saleem Durrani (Cricket), Gurucharan Singh Randhawa (Athletics), Sarabjeet Singh (Basketball), Manuel Aaron (Chess), Nandu Natekar (Badminton), and LB D’souza (Boxing). Meena Shah (Badminton) was the first woman to get this award in 1962.

As it is worldwide known fact that behind every successful student, there is always a remarkable teacher and his prayers. To recognize the contribution of the coaches in sports, the government of India decided to give away the “Dronacharya Award” which is named after “Dronacharya”, an exceptional guru who trained the Pandavas. It is usually given to coaches who have produced medal winners at prestigious national and international sports events. The winners of the award are presented a statue of Dronacharya, ceremonial dress and a certificate along with a cash prize of five lakh rupees. Bhalachandra Bhaskar Bhagwat (Wrestling), Om Prakash Bhardwaj (Boxing) and O. M. Nambiar (Athletics) were the first recipients of the award who were honoured in 1985.

Dhyanchand Award which is officially known as Dhyan Chand Award for Lifetime Achievement in Sports and Games, named after Major Dhyanchand is the highest award for lifetime achievement in the field of sports. Major Dhyanchand was not only a soldier in the Indian Army but was also an Indian field hockey player who scored more than 1000 goals in a career span of 20 years. Instituted in the year 2002, this award is conferred annually by the Ministry of Youth Affairs and Sports. The recipients of this award are selected on the basis of their contribution to sports both during their active sporting career and after retirement. Dhyanchand awardees are given a cash prize of five lakhs rupees along with a medal and certificate.  The award is conferred to a maximum of three sportspersons in a year (though exceptions were there in 2003, 2012, 2013 and 2019).

The monetary benefits which come along with these awards may not be substantial but the respect, honour, and pride which come along are absolutely unfathomable. Receiving these awards from the government of the country boosts the morale of the youth and provides them an impetus to perform exceptionally well in the games