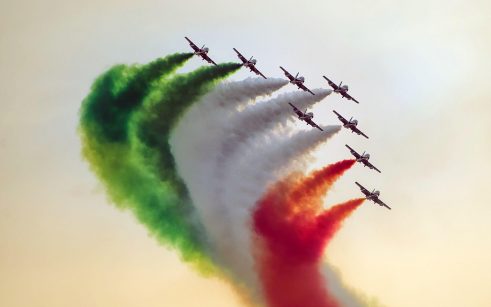 The motto of The Indian Air Force is “Touching the Sky with Glory”. It has also been involved in the United Nations peacekeeping missions. The India Air Force has been engaged in the four wars with the Pakistan and one with People’s Republic of China after its independence. Indian Air Force is categorised into five operational and two functional commands. On January 2002, Arjan Singh was granted the rank of Marshal of the Air Force to by the Government of India, thus making him the first and the only Five-star officer with the Indian Air Force and ceremonial chief of the air force.

On 8th October in the year 1932, celebration of this day officially started in order to increase awareness of Indian air force.  This day is commemorated in air force bases all across the nation with air shows and parades conducted by air force cadets.

Indian Air Force has been a fundamental and crucial part of the defence system of the nation along with the Indian Navy and Army. The first flight of IAF’s was formed on 1st April 1933 and during the Waziristan war against the tribal IAF came into brave action for the first time. Later IAF got expanded extremely during the Second World War. IAF has always proved to be a great defence force. Its anonymous contribution and achievement made the IAF win the prefix of Royal in 1945 and hence came to be known as the Royal Indian Air Force (RIAF).

Currently the Indian Air Force has a sanctioned strength of 139,576 active personnel and 140,000 reserve personnel. IAF have approx 1748 aircrafts. Not only it has the responsibility to safeguard the Indian Territory from clashes, but also to provide support during natural calamities to the affected areas. The IAF has been involved in many wars: World War II, Sino-Indian War, Operation Cactus, Operation Vijay, Kargil War, Indo-Pakistan War, Congo Crisis, Operation Poomalai, Operation Pawan, and many others.

This day is celebrated with same ardour and gratification at various Air Stations all over the country. All Air Force stations in several states conduct their parades at their respective Air bases. Even the military parade is also conducted as per the same schedule and this protocol is followed each year.  The Supreme Commander of the IAF is the National Commander of the air force also contributes in many forms. In the last few years, Indian Air Force has been expanding massively and has initiated the bringing up of women into the short service commissions.