Space Centres is an organisation where we collect all information about space-related activity. Space Centres may concern for these activities are:

Space Centres may be Public or Private Organisation. Space Centres are managed by the Department of Science. The First Space Research Centre was organised in 1962 by Dr. Vikram Sarabhai which is known as Indian National Committee for Space Research (INCOSPAR). The INCOSPAR was announced as ISRO in 1969. One in every of the Space centres of the Government of India is known as ISRO. It stands for Indian Space Research Organisation. The Administrator of ISRO is K. Sivan, Secretary(Space). The First Satellite of India was developed by ISRO which is known as “ARYABHATA”. There are 17,222 employees working in ISRO. The Space Centre aims to provide all information about the Galaxy. The Very First “Military Rocket” was used by Tipu Sultan during the Mysore war against the British in 1804. The potential Technology was recognised by the Indian Scientist and Politicians for Fighting and Research & Development. ISRO and DRDO had done research for developing Cost-reduction technologies for access to space. The Department of Science of Government of India manages all Space Centers throughout India. Indian Space Centres had launched 11 satellites within 2008. The following list of Space Centres who under the Department of science are: 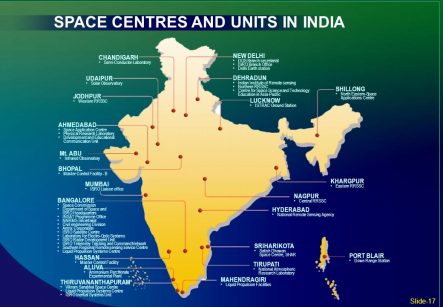 The following list of Space Centres which allocated in India are:

There are many institutes available in India who give the trainee science students for research centres. Also many sites provide some tutorials and pdf for learning.  And there are also many space centres who are working on paramount projects. Every aspirant who wants to develop their career in a Research Centre should be aware about science subjects and Competitive exams. Space Centres launching the space vehicle to access the space.