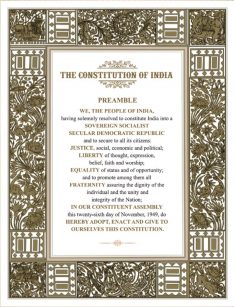 A constitution is a document having a special legal sanctity which sets out the framework of the principle functions of the organs of the government of a state and declares the principles governing the operations of those organs. In generally accepted terms it means the rule which regulates the structure of the principle organs of the government and their relation to one another. It is the living document, whose interpretation may change as the time and circumstances change.

The Constitution of India also known as “Bhāratīya Saṃvidhāna” is the supreme law of India. It is the longest written constitution of any country on earth. It incorporates the best features of each constitution of different jurisdictions across the world. All the constitutions were suitably modifies in such a way so as to avoid any uncertainty or shortcomings that existed in them. B. R. Ambedkar, chairman of the drafting committee, is widely considered to be its chief architect and also known as the “Father of Indian Constitution”.

Is can also be labeled as “Borrowed” Constitution as the Indian constitution was drawn from a number of sources, keeping in mind India’s needs and conditions. Few features of previous legislation such as the Government of India Act 1858, the Indian Councils Acts of 1861, 1892 and 1909, the Government of India Acts 1919 and 1935 and the Indian Independence Act 1947 were borrowed in the Indian Constitution. In the Constituent Assembly, Dr. B. R. Ambedkar stated that ‘There is nothing to be ashamed of in borrowing what suits us best”.

There are a few facts of Indian Constitution stated below:-