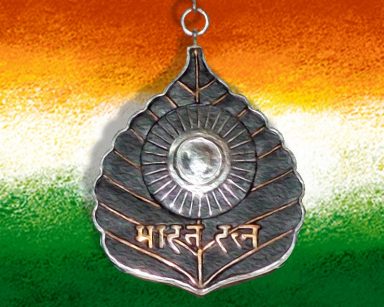 Bharat Ratna also known as the “Jewel of India”, is the highest civilian honor, instituted in the year 1954, is given for extraordinary service towards furtherance of Art, Literature and Science, Sports and in recognition of Public Service of the highest order. This award can be granted posthumously and since its establishment 7 awards were granted posthumously. This award is one of the precious awards given in the country which is given to any person irrespective of race, occupation, position, or gender. Until 2011, the official criteria for awarding the Bharat Ratna stipulated it was to be conferred “for the highest degrees of national service. This includes artistic, literary, and scientific achievements, as well as “recognition of public service of the highest order. In December 2011, the Government of India altered the criteria to allow sportspersons to receive the award. Any person without distinction of race, occupation, position or sex is competent for the award. In a particular year, this honour is restricted to a maximum of three.

The award was established by the former President of India Rajendra Prasad on 2nd January 1954. The concept of awarding this award posthumously was not there in the original statue declared in January 1954 but later it got declared posthumously in January 1966 statue of this prestigious award. Prime Minister Lal Bahadur Shastri was the first individual to be honoured posthumously. Also, there is no written provision that the Bharat Ratna award should be awarded to Indian citizens only. Bharat Ratna Awards were temporarily suspended from July 1977 to January 1980 due to the change in the national government. It was again suspended for the second time from August 1992 to December 1995. Morarji Desai was the only prime minister who was opposed to the idea of such civilian awards and had stopped giving awards during his tenure as the awards have often been used by the ruling parties to extract political mileage.

The Bharat Ratna award medals are produced at Alipore Mint, Kolkata by the India Government Mint. In 1954 specifications of the Bharat Ratna Awards was a circle made of gold 35 mm in diameter with a sunburst design in the centre of opposite side. The text ‘Bharat Ratna’ written in Devanagari script, inscribed on the upper edge in silver gilt with a wreath set along on the lower edge. The Bharat Ratna medal is cast in bronze. The medal looks like a peepal leaf, with sunburst in the center and Bharat Ratna is engraved underneath it. The size of the medal is approximately 59 mm long, 48 mm wide and 3.2 mm thick with “Bharat Ratna” written on it in the Devanagari script. An image of sun is also printed on it. The backside of the award carries the state emblem and Satyamev Jayate inscribed in Devanagari script. As of 2014, the total cost of one Bharat Ratna medal & miniature along with its box costs Rs. 2,57,732.

Physicist C. V. Raman was the first person to receive Bharat Ratna and Lal Bahadur Shashtri was the first person to receive after death. The eldest person to receive was Sardar Vallabhbhai Patel (after death, at age 116) and Sachin Tendulkar is the first sportsman to receive this award and also the youngest person alive at the time of receiving the award (at the age of 40). So far only 2 awards were given to foreign citizen-Nelson Mandela (1990), Khan Abdul Ghaffar Khan (1987). In the year 1997, it was the only time when the Bharat Ratna Awards were announced but not given. In 1992, the government decided to give the award posthumously to Subhas Chandra Bose. But the decision of the government was opposed by those who had refused to accept his death. Following a 1997 Supreme Court decision, the press communiqué announcing Bose’s award had to be cancelled.

The last Bharat Ratna honour was given on 8th August 2019 to three recipients.

Though, no one has been awarded the Bharat Ratna this year in 2020.

However below is a list of all the receipents of Bharat Ratna till date.